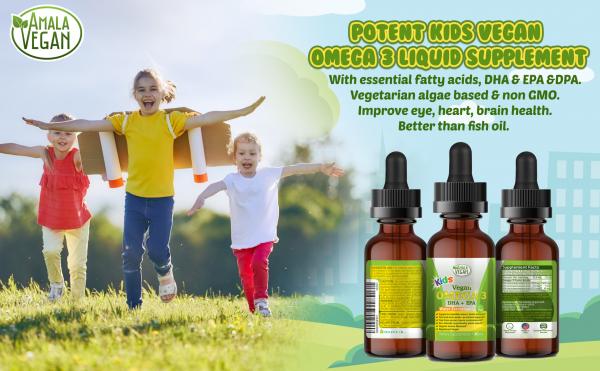 Earlier today, Amala Vegan finally announced the release of Amala Vegan Liquid Omega 3 for kids – it’s new Vegan Omega 3 for kids, which has been in development since 2020. The main aim is to bring to market a unique plant-based algae Omega 3 sourced from pure water tanks outside the ocean using an exclusive water extracted method to source the oil…. but it does so, with a difference.

Jay, Marketing Manager at Amala Vegan, says: “We wanted to try something new with Amala Vegan Liquid Omega 3 for kids. Anyone familiar with the Vegan Supplements market will probably have noticed how everyone else seems to derive their Omega 3 from fish. This is a problem because of the potential of ocean-borne contaminants in the sea ending up in the fish.”

So as a welcome breath of fresh air, Amala Vegan Liquid Omega 3 for kids will instead use a pure source of Omega 3 free from any ocean-borne contaminants as it is grown in freshwater tanks outside the ocean. Amala Vegan chose to make this move because of concern over the environment due to overfishing as well as offering the consumers an alternative compassionate source of Omega 3 which is cruelty-free.

Amala Vegan has been in business for over 8 years, being established in 2014. Since Day 1 it has always aimed to provide the very best high-quality vegan plant-based supplements for health-conscious consumers who care for the environment as well as what they put in their bodies.

Amala Vegan Liquid Omega 3 for kids is set to launch immediately and is available now to order. To find out more, it’s possible to visit https://www.amalavegan.com/products/amala-vegan-omega-3-for-kids-organic-vegan-liquid-supplement-kids-fish-oil-with-dha-epa-dpa-fatty-acids-plant-based-algae-oil-immune-heart-brain-health-for-children-30-60-doses

For further information about Amala Vegan, all this can be discovered at https://www.AmalaVegan.com/