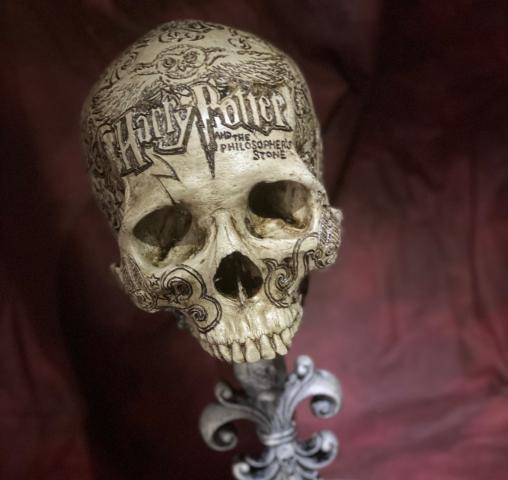 Wylie’s ‘Hide and Seek’ promotion will feature the artist’s newest line of Harry Potter resin replica skulls, worth hundreds of dollars, with each featuring a unique, hand-carved and painted design.

More information is available at https://www.realhumanskull.com/hideandseek

Members of Wylie’s latest mailing list will be notified when a prop has been hidden at the Harry Potter world theme park. They could be found anywhere, but will never be located in hard-to-reach places such as on rides, in queues, stores, restaurants, bathrooms, or unauthorized areas.

Over the last decade, the market for real and replica skulls has grown as enthusiasts are looking to expand their collections. Between 2013 and 2016, sales rose by almost 1,000%. The decorative items are often embellished with carvings, paintings, and other artwork, increasing their selling point as unique collectibles.

The Harry Potter skull range features designs of each Hogwarts house, a graduation skull, a death eater skull, and the newest Philosopher’s Stone skull. As the ‘Hide and Seek’ program continues, Wylie plans to add more skulls with lines and imagery from each book.

Other skull designs available to buy online from Zane Wylie Skulls include models with Viking, Celtic, Masonic, and Gothic Carvings. Some also feature popular culture artwork such as The Goonies, Mando, and Sith. Carvings take anywhere between 2 and 220 hours to complete.

Wylie also sells a variety of accessories to display his pieces, such as glass domes and metal stands. Merchandise such as carved coins, T-shirts, hoodies, mugs, bags, and more are available via his online shop.

Zane Wylie’s props are often used for cinematic events and have been featured on many shows including Dan Brown’s ‘The Lost Symbol’, AMC’s ‘Preacher’, and DC’s ‘Constantine’. He has also created personalized skulls for celebrities such as John Barrowman from ‘Green Arrow’, Billy Boyd from ‘Lord of the Rings’, and ‘The Walking Dead’s Michael Cudlitz.

The family-run business is thought to be one of the best skull carvers in the U.S. Wylie’s designs are there to show the beauty in sacred objects and bring light to a taboo subject.

A satisfied customer described the skull as, “a perfect heirloom. A beautiful and professionally crafted work of art, that I proudly display in my home. The detail on the hilt is beyond description.”