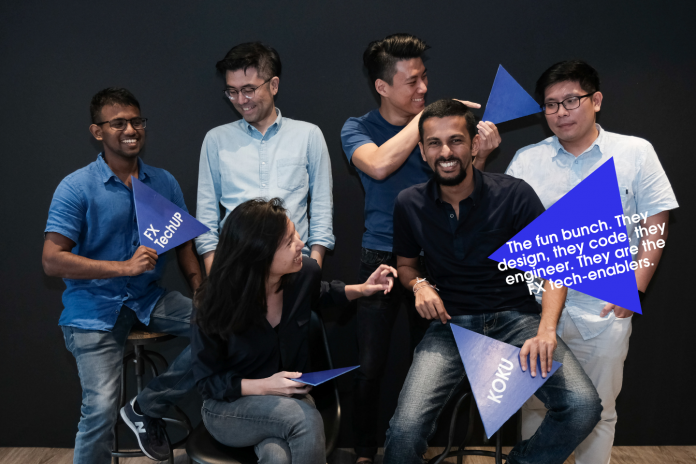 19/4/2019 – Koku, a Singapore-based fintech that focuses on foreign exchange (FX) has announced that it raised a US$2 million pre-Series A funding.

The round was led by Jason Zeng, the co-founder of Tencent Holdings who had also founded Chinese angel investment company Dencent Capital.

The newly raised capital, according to Koku, will be used for product development and regional expansion to neighboring Southeast Asian countries including Indonesia, Vietnam, Cambodia, and Myanmar.

The company will also use it to invest in expanding and growing its FX TechUP Suite to offer artificial intelligence technology and machine learning that will utilize data for users in the ecosystem.

Koku is a platform that works with non-bank financial intermediaries, including remittance companies and liquidity providers in Singapore, Hong Kong, and the Philippines.

Its FX TechUP suite enables wholesale trading of currencies between licensed liquidity partners screened and on boarded by Koku.

This allows liquidity providers to conduct on-demand settlement to provide cheaper, quicker and digital-first remittance services to their customers.

Besides, the suite also features a white label remittance solution for businesses to add or build digital remittance offerings such as e-wallets.

“With our expertise in tech-enablement, paired with their industry expertise, we’re able to save on cost, time and risk management. As our customers aren’t burdened with the responsibility of ensuring the technology works, they are able to focus on providing for their customers,” said Koku’s CEO and Founder Calvin Goh.

The immediate plan to execute would be improving the technology for non-bank remittance and liquidity providers that it believes will push their business further for the next six months.

The company aims to increase its transaction volume from its current US$10 million a day to US$30 million. To accomplish this, Koku will also be seeing a boost in headcount by 30 percent over the next six months.

A recent report by the World Bank states that the remittance sector in 2019 will grow to 4.2 percent from US$142 billion value estimation in 2018 in East Asia and Asia Pacific alone.

By tech-enabling businesses in the region with technology, there’s an opportunity for Koku to capitalise on the increase in cross-border transactions, digital remittance and financial inclusion.

We are aware that tech-enabling the non-bank remittance and liquidity providers is a complex business model that requires hard work. But it will be rewarding if we can provide the same facility to these underserved groups and help them in their operations,” said Goh.

Commenting on the deal, Chris Cao, Vice President of Decent Capital’s Angel Investment Department said that Koku is the first company in Singapore that their founder Jason Zeng has invested in since co-founding Tencent.

“We’re confident that Koku’s technology will bring significant improvements to the business offerings for their partners. With their expansion plans and continued advancement of their technology, we look forward to seeing the positive impact on the remittance industry throughout the region.”

Moving forward, Koku said it expects to raise US$10 million in a Series A round during the next couple of months.

“We’ve created a lot of curiosity and interest within the industry because of this. With the amount that’s secured in this round of funding, we’re confident that we’re in good standing to further develop our offerings and expand into new markets as we move towards Series A,” Goh added.