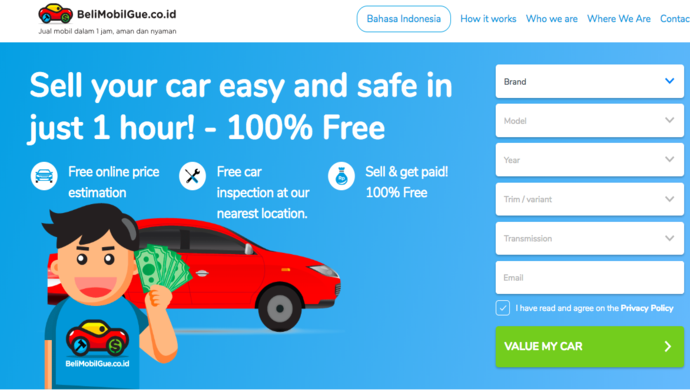 12/2/2019 – The funding will be used to open up more inspection centres in the Greater Jakarta area and other major Indonesian cities.

BeliMobilGue meaning BuyMyCar in Indonesian is an auto startup that focuses on the used-car market. Co-founder Rolf Monteiro recognized Indonesia’s potential as the biggest car market in Southeast Asia and launched the eBay esque platform for individual car owners to sell their used cars to verified dealers.

“We’re trying to remove as many headaches as possible for the private seller, so don’t have to go down the consumer-to-consumer route,” Monteiro explained. “We transact the car to our network of private buyers, which includes dealers, showrooms and corporates who are looking to trade or own vehicles.”

Individuals looking to sell their cars can do it with zero costs. Interested sellers can have their cars assessed by BeliMobilGue’s inspection centres and receive an assessment report showing a suggested selling price. An online auction is then triggered by the seller’s agreement

Car inspection is paid by the winning bidder while the startup takes zero cut from the deal. Sellers will get immediate payment after a deal is sealed via bank transfer. The car is then held at the company distribution centre awaiting for buyer’s pickup.

With other players like iCar Asia in the market, Monteiro is looking to first achieve 1% market share and once that target is achieved, the startup is aiming for a 10% market share in Indonesia’s auto sales space.

BeliMobilGue had previously raised US$3.7 million in a pre-Series A round led by Indonesia’s Intudo Ventures, joined by Amand Ventures, Tasman Fund, and Digital Garage.