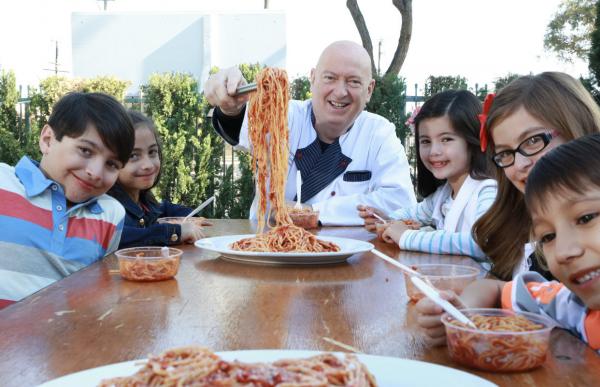 In response to the 1,205,260 children who go to bed hungry each night in California (that’s one in seven kids), a GoFundMe campaign will be launched on April 1 seeking donations as little as $5 — an amount that feeds a family of four. While food banks are helping ease the crisis, many of these children, often referred to as “motel kids,” live in cheap, single-room establishments in crime-ridden neighborhoods that do not contain kitchens. Since these families are unable to cook dinner, they depend on already prepared meals like those provided daily by Caterina’s Club, a Southern California nonprofit founded by humanitarian Sir Bruno Serato.

In addition to celebrities, Caterina’s Club is calling out to everyone who wants to participate in reversing food scarcity to get involved. The public are encouraged to post the GoFundMe link on their social media platforms and a fact sheet with more information about the hunger crisis in California will be available on the Caterina’s Club website.

Currently, Caterina’s Club feeds 5,000 kids each night and has done so since 2005 but the spread of COVID has increased the need exponentially. The nonprofit works through Boys & Girls Clubs throughout California to deliver hot pasta dinners to underprivileged kids nightly. Serato even mortgaged his home twice to keep the program going and when a fire burned down his restaurant, the Anaheim White House, where he prepares the dinners, he secured a kitchen the next day and kept feeding the kids without interruption.

For his humanitarian work, he has earned many honors including being named a CNN Hero, being knighted by the Italian government and House of Savoy, received the Ellis Island Medal of Honor, was personally blessed by Pope Francis, received a humanitarian award from Congress on the steps of the U.S. Capitol – accolades he accepts to call attention to the crisis of hungry children in the U.S. He has also been featured in People Magazine, CBS Evening News, NBC Nightly News, CBS Sunday Show and media around the world. For more information, visit www.caterinasclub.org