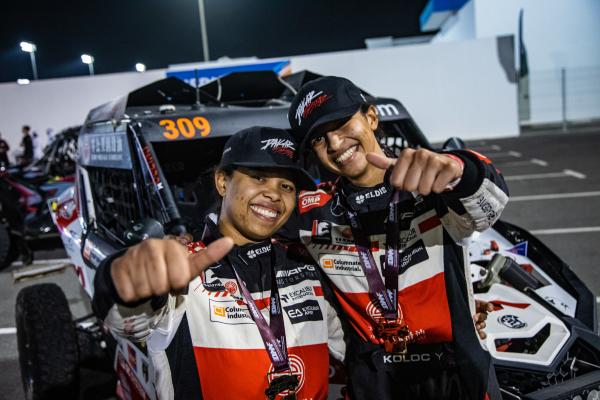 “It was a brand new event for us, and only when we got there, we realised that the girls would be racing against stars like Nasser Al Attiyah, Dani Sordo, Yazeed Al-Rajhi, and Kris Meeke. Leaving aside that Day 2 got canceled, I am happy with the results, but most importantly with the girls‘ performance,” said Martin Koloc, Buggyra ZR team principal.

On the first and, as it turned out, unfortunately also the last day of the rally, two stages were held, which were marked by punctures for the Koloc sisters. “Aliyyah had two punctures on the first stage, and a third one would have meant the end of the competition for her. Knowing this, she drove the entire second stage very carefully which must have been nerve-wracking given her temperament,” said David Vršecký, Buggyra ZM Racing Technical Director. “On the other hand, it was a preparation for the marathon stage of the Dakar because the same rules apply.” Yasmeen also had a tire change and in both cases, the co-drivers showed their technical skills as despite the punctures, the Koloc sisters were able to overtake WRC driver Dani Sordo. “Big praise to both girls, especially to Aliyyah who drove many kilometers on the edge to finish the rally,“ added David Vršecký.

The slightly altered headline of the famous Bond film completely describes the second day which was marked by a 200-kilometer stage. However, strong winds and resulting poor visibility ended the rally before the day had even begun. “We were optimistic for a long time because the bikers rode the stage and the helicopters flew without any problems, so safety on the track was guaranteed. But then the organizers said that there was a high probability that the weather conditions would worsen, so they canceled the stage in our category. We were not happy about that because the Dakar is raced in worse conditions, but there was no chance to do anything about it. No one can convince me that there is more danger in the Can-Am than on a bike,” said David Vršecký, evaluating the FIA’s decision.

As a result of the stage cancellation, Yasmeen finished fourth in the T3 category of the Qatar Baja, with Aliyyah taking sixth place. ” Both girls are in the top three of the championship standings, with Aliyyah leading and Yasmeen in third place. The next Baja isn’t until the fall, so we are starting to prepare for the circuit season, especially the NASCAR races. So far everything is going to plan,” added Martin Koloc.

What they said after the race

Yasmeen Koloc: “I was really looking forward to the second day, which got cancelled. It’s a pity, I felt very good in the car. I beat Aliyyah for the first time, but she carried it bravely (laughs).”

Aliyyah Koloc: “Too bad about the punctures, it could have been better. For the first time, I had to drive below my limits because the most important thing was to reach the finish line. It’s an interesting experience, not easy at all. But I am always learning. Thank you very much to Sebastien for his mechanical skills and immense patience.”

Sebastien Delauney: “I’d say the wind is part of racing, and if it was OK for the bikes, we could have done it too. Compared to Jordan, we drove a completely different race but Aliyyah did just fine. After two punctures it was a lot about tactics.”

Stéphane Duple: “Sebastien said it, they practically pulled us off the start. Yasmeen was excellent in the first two stages, he has a lot of potential for growth.”

David Vršecký: “We went to the start and they canceled a stage, which is not pleasant. As an old-school racer, it is annoying me. In Europe, it rains a bit and races get canceled. Here the wind blows and it’s over. If someone doesn’t like racing, they can stay at home. The girls did very well considering the circumstances and the rally profile. During the break, we will build two new cars for the 2023 Dakar.”