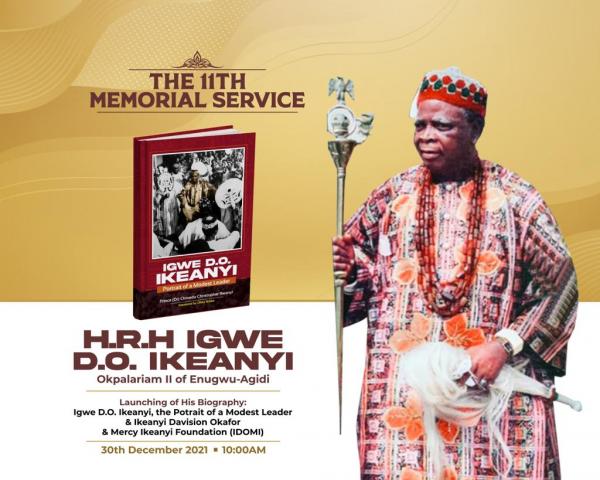 The newly published book, “Igwe D.O. Ikeanyi – Portrait of a Modest Leader”, reveals the current status of the Enugu-Agidi community and what can be done to help it.

More details can be found at https://idomifoundation.org

The new book highlights the sleepy town’s descent into violence and the many attempts to restore it into its former glory. IDOMI Foundation says that Igwe spent his entire life trying to rebuild Enugu-Agidi – particularly its dilapidated elementary schools so that children could learn in earnest without fear of war.

Enugu-Agidi, a small community in the Njikoka local government area of the Anambra state, is plagued by economic turmoil and local violence, according to IDOMI Foundation. As the town attempts to move forward in the modern world, the nonprofit believes that the best way to achieve this is through education – making it accessible for both women and children and improving the way it is taught in the area.

As an added incentive, Igwe also built makeshift public eating centers for children to be persuaded to go to school so that they could eat hot, fresh meals. These centers offered free cooked food and also catered to the thousands of residents suffering from malnutrition.

Igwe Ikeanyi was a visionary and mobilized the well-to-do and public-spirited people in the community to build secondary education facilities to continue the path of children who completed their primary schooling. This gave birth to the two existing public secondary schools in Enugu-Agidi.

Ikeanyi also championed the rights of women in the community, saying that they should also be allowed to study.

Idomi Foundation was launched in his memory in December 2021. The new book on his life details his hopes and dreams for his country and community. All proceeds goes to educational scholarship of the Idomi Foundation.

The author of the book Prince (Dr.) Chris Ikeanyi wrote, “It is the shared belief of Igwe Ikeanyi and his wife, Lolo Mercy Nkechi, that every child deserves quality education regardless of the child’s choice of career in life; that quality education is the bedrock of whatever a person becomes in life.”