Marko Danial, more commonly known as Pharaoic, has cultivated a successful career as a content creator and CEO of Spzrts. 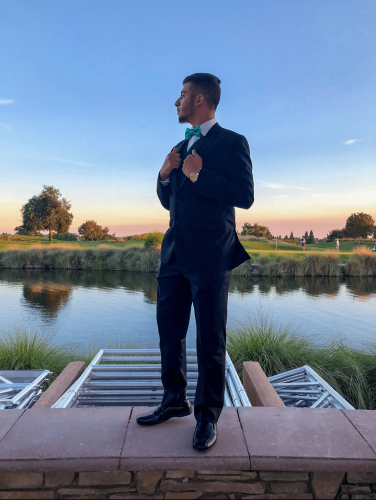 In 2007, Marko Danial moved to the United States with his family in order to find better opportunities. He’s been faced with a number of struggles, including the isolation that came with being an immigrant, but he’s also used those struggles as a springboard for success.

During these challenging times, he relied on his creativity and entrepreneurial spirit to do something big.

He realized the true potential of content creation, beginning his journey with an Instagram account that quickly grew to more than 150,000 followers. Through late nights and hard work, Danial has learned the ins and outs of successful content creation to be one of the most forefront experts in his area. He’s created several sports-related accounts on Instagram and TikTok, and today, he manages highly successful social media accounts with a network of over three million followers.

His love for content creation and sports isn’t stopping there, though. Marko Danial, also known as Pharaoic to his followers, launched a new company called Spzrts, where he is the CEO. Through this company, he’s creating content while also creating physical gear designed to help athletes and casual sports players around the world put their best foot forward in the game. For example, the Spzrts selection of athletic gear includes clothing such as t-shirts, long sleeve shirts, tank tops, and hoodies, as well as hats, arm sleeves, headwear, and sports gear and equipment.

According to Pharaoic, he plans to continue the expansion of Spzrts. The expansion is projected to include all-new products and ideas, including brand new inventions, that will help athletes get the most from their gameplay.

Recently, Danial and his company Spzrts assisted college basketball player, Davion Robinson, with launching his own personal website (davionrobinson.com). Robinson currently plays for the University of Antelope Valley a little outside of Los Angeles. Robinson accredited Danial and Spzrts as “the reason I realized it was important for me to have a domain to expand my platform and reassure my audience of my official platforms I use while keeping them up-to-date with my personal life and making it easier to connect with me.”

While Pharaoic has the heart of an entrepreneur and is committed to furthering his career, he hopes to give back by inspiring others to keep chasing their dreams.

“I believe that as an influencer and content creator, it is my responsibility to motivate others in achieving their goals, stay positive, and to work hard for their dreams,” said Pharaoic.

By serving as a role model for others, Pharaoic aims to leave behind a legacy of hard work, ethics, and entrepreneurial spirit. He desperately wants others to see that they hold their own fate in their hands and that hard work brings tangible rewards.

Along his journey, Pharaoic has seen struggle and turmoil as an immigrant, success as a content creator, and everything in between. He has been featured in numerous publications for being a young content creator and influencer. Danial continues building a reputation for being tenacious and never giving up on his dreams, and he’s becoming well-known for never giving up in trying to help others realize their potential and act on it.

Spzrts continues to grow in followers. More information can be found at: https://www.spzrts.com/.