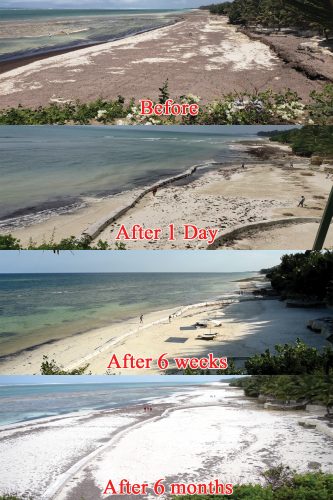 Coastal communities all around the world have been fighting beach erosion issues for centuries. Since the dawn of the tourism industry, people have flocked to beaches and coastal communities to unwind, decompress and forget about the daily stresses and rigors of life for some brief period of time. Beaches continue to be the most sought out tourist destination for most all leisurely travelers all over the world. Some countries are overwhelmingly dependent upon the revenues and economies that are created by their local beaches and tourism industries. This is why it is more important than ever for many of them to solve their beach erosion issues.

Swahili Beach Resort, an opulent, award-winning 5 star beach resort, located on Africa’s East coast, on the Indian Ocean has battled beach erosion issues for a number of years. About 5 years ago, the ownership of the resort asked the National Environment Management Authority (NEMA) for permission to find a solution to the hotels beach erosion issues. NEMA granted permission for the hotel to explore a means of a solution that would save and protect the resorts beach. While permission for the project was granted, the governmental agency had a condition that any method that was used could not harm the environment. The resort then explored an option that had previously been previously successful in Zanzibar. This method consisted of the construction of a gabion made up of mangrove timber. Unfortunately, this solution did not prove positive for the beach resort. It was at this time, they chose to try the Sandsaver, a rotationally molded beach erosion barrier that had previous proven success in the United States.

The Sandsaver, a large, rotomolded plastic beach erosion barrier was installed in January of 2020 on the coast of the African resort. Inside of the first few tide changes an extremely noticeable accretion of sand was already being observed behind and in front of the modules, in just the first 12 hours. After 6 weeks of being installed, a video and photo update was provided, where it was estimated that over 20,000 cubic yards of sand had been accumulated thus far, while increasing the width profile of the beach over 100 feet in some areas of the beach.

Kenya, like many other nations faced the Covid-19 pandemic starting in March of 2020 and was forced to mandate business closures and order citizens to shelter in place in effort to minimize the spread of the virus. In July, the country allowed some businesses to begin reopening under protective guidelines.

The videos and images provided of the Sandsaver system for the 6 month update shows the system getting closer to being completely covered by sand, with an incredible amount of sand accumulating behind the modules and an even more impressive increase of width profile along the beach where the system is installed. Since the system’s installation, an extremely conservative estimate of sand accretion around the Sandsaver modules is over 30,000 cubic yards of sand has been accumulated, while over 150’ of width profile has been added to the resorts beach front. While the trade winds are currently coming out of the north, the seasonal shift later this month will aide in the accumulation of sand around the Sandsaver system, namely along the south end of the installation.

The Sandsaver beach erosion modules work in two ways, first by breaking down the energy of the wave when it crashes against the durable, rotomolded module and then allows for the surf to travel through the larger end of the tapered openings, where the water speeds up and is discharged out of the smaller diameter opening of the thru holes. This allows for the water and sand content to get to the beach side of the Sandsaver modules. The wave action must retreat thru the smaller opening to return to the surf, thus giving the sand time to settle onto the beach side of the modules. Over the course of time, the sandsaver modules will completely bury themselves in accreted sand, while beach gains are realized on both sides of the modules.

The Sandsaver is a patented product manufactured by rotational molding company, Granger Plastics, a Middletown Ohio-based plastics company producing a variety of rotomolded products for a growing number of industries ranging from Aerospace to Waste Management. In 2013, a third party engineering firm issued a final report on Sandsaver’s Lake Michigan installation that stated “the results of the shoreline in response to the Sandsaver system are unambiguously positive” and that “beach volume gains did not just occur behind the Sandsaver modules, as some had anticipated. Tangible gains in bottom elevation were witnessed as much as 50 feet in front of the Sandsaver system into the lake.” The report also said that the Sandsaver system “does not generate adjacent negative impacts associated with shore-normal and impermeable structures. The Sandsaver modules’ permeability and placement in a shore-parallel orientation demonstrated no negative impacts to adjacent stretches of beach”.

Granger Plastics Company has recently released its third part of its Sandsaver beach erosion solution video series, as the recently installed system in Africa continues to show extremely impressive results of sand accumulation and increasing beach width. The once rocky, coral covered beach front was once a deterrent to guests and those who frequented the beach, but recently with the success being witnessed by the Sandsaver installation, tourists are enjoying a sand-filled beachfront.

MIL’s equity fund closes at US$7.3 million for investment pipeline