Pavel Kozlov is best known for his portrayal of Victor Romanoff, the Siberian Fighting Spirit on the American pro wrestling circuit. But his real life “fighting spirit” has him setting his sights on Hollywood. 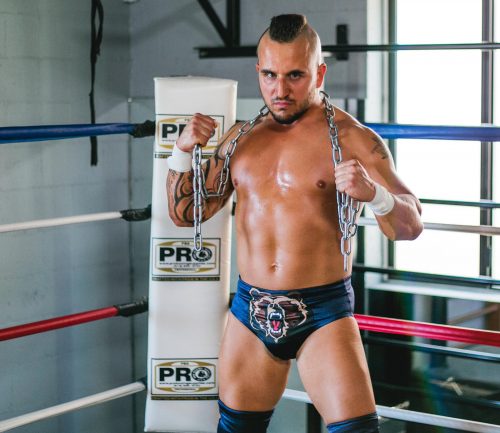 Not just another kid from Moscow, Pavel Kozlov was an only child whose parents were both professors at the University in Moscow, Russia. From a very early age he was expected to follow in his parents academic and creative footsteps.

But something changed in Pavel during his early teenage years. It took quite a toll on him to lose his father at the age of 13. And it was right around the same time, Pavel discovered American professional wrestling.

Professional wrestling wasn’t nearly as popular in Russia and Pavel could only catch glimpses at a time. Once a week, very late at night, the local TV station would air just a 45 minute spot.

But Pavel made sure to watch each and every broadcast. And he even video taped all of them on VHS so he could study the moves.

Growing up in Moscow, however, there was little option for specialized training in professional wrestling. So at the age of 17, Pavel Kozlov began training and competing in the Moscow Federation of Kickboxing.

After graduating from high school, Pavel Kozlov enrolled at the University in Moscow to study journalism. He had much success during his time there and eventually got a job as a journalist.

But the desire to become a professional wrestler never left Pavel’s mind. And in 2007 he quit his job, dropped out of the University (with only one year left to go) and made a very difficult move to America to follow his ultimate dream.

This was one of the hardest decisions Pavel has ever had to face. First of all, his English was far from fluent. He had to work incredibly hard just to break the language barrier.

And on the other hand, Pavel left everything he knew behind. He bet it all and made a difficult decision to move to the United States… no friends to lean on, no family to back him up, and no guarantees of success.

The Birth of Victor Romanoff

Once he got to the states, Pavel Kozlov wasted no time at all. While still contending with his battle to learn English, he enrolled at the WWA4 school in Atlanta, Georgia. Pavel studied wrestling at WWA4 for a year and a half, and even began to participate in independent wrestling matches throughout Georgia and North Carolina.

But eventually it would be time to move on to bigger and better things. After leaving the WWA4 school in Atlanta, Pavel trained at the prestigious Team 3D Academy of Professional Wrestling in Orlando, Florida.

It was at Team 3D that Pavel created the character Victor Romanoff, the Siberian Fighting Spirit. And it was a dream come true for him. He would think back to his time growing up in Russia, his body far from looking like the guys he watched on TV. But now, after years of hard work and dedication to transform his body and his mind, he had become one of the larger-than-life characters that he’d looked up to all those years.

After leaving Team 3D, Pavel Kozlov wrestled around the U.S. and Europe. And in 2015 he made his first appearance wrestling for the WWE on Monday Night Raw.

From the Wrestling Ring to the Silver Screen

Now that Pavel Kozlov has seen his dream come true as a pro wrestler, he has set his sights on Hollywood. Quoted as saying his goal is to become “the best bad Russian in Hollywood.”

Pavel certainly has the look and the style for portraying evil characters. His most recent TV appearances include roles on “MacGyver” and “Black Lightning.”

But while Pavel is happy to play into Hollywood stereotypes with his Russian accent and pro wrestler physique, there is more than meets the eye. Pavel is currently expanding his acting skills at the Playhouse West in North Hollywood.

With his wrestling background and proven nature to defy all the odds, it goes without saying that Pavel Kozlov is Hollywood’s next big thing.