According to the GMI Research latest report, the global consumer robotics market will be worth USD 32.8 billion in 2027 driven by rising demand for robots in the domestic segment. The market is expected to grow at a very high CAGR of 30.7% between 2020 and 2027. 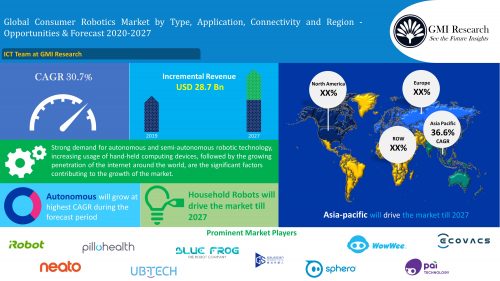 The consumer robotics market will be primarily driven by an increase in demand for robots in the domestic segment will lead the market growth to a CAGR of 30.7% between 2020 and 2027. The consumer robotics market is estimated to touch USD 32.8 billion in 2027. Consumer robotics is a branch of technology that deals with robots that coordinate with humans and assist them with their daily routine tasks. These robots use sensors, actuators, and other interfaces to communicate with the physical surroundings. They are programmable machines and are available in autonomous or semi-autonomous forms.

The significant factors contributing to the growth of the global consumer robotics market include strong consumer demand for both autonomous and semi-autonomous robotic technology, the increasing usage of hand-held computing devices, and the growing penetration of the internet worldwide. In addition, continuous advancements in consumer robotics technology is another major reason leading to accelerated adoption of consumer robots as it allows people to spend their time on other important tasks. Furthermore, the increasing development of smart homes has also surged the demand for consumer robots. The average selling price of these robots is witnessing a significant decline due to the rapid technological advancement by the leading manufacturers. Therefore, all these factors will directly energize the growth of the market in the coming years.

According to the World Health Organization, by 2020, the total number of people within the age 60 years and above will outnumber children younger than 5 years. According to the Population Reference Bureau, the geriatric population is rapidly increasing in regions such as Asia and Europe. These regions have the highest number of world’s aged population ranging from 65 years and above.

The autonomous segment is expected to grow at a higher compound annual growth rate during the forecast. This is attributed to the strong consumer demand for autonomous robots at the global level. The leading robot manufacturers are heavily investing in autonomous technology to bring rapid advancement in the robots. The autonomous property provides robots more flexibility to perform a specific work self-reliantly, thereby enhancing overall productivity.

The household robots segment held the maximum share in 2019 and is expected to dominate the market throughout the forecast period due to its ability to automate routine tasks and improve efficiency, resulting in a reduction of the consumer’s stress and time.

Wifi segment is expected to grow at the highest compound annual growth rate during the forecast period owing to the accelerating demand for the robots with the high-speed and widespread network coverage.

North America held the largest market share in 2019 owing to the accelerating adoption and high acceptance of consumer robots in this region. On the other hand, the Asia-Pacific region is expected to grow at the fastest rate during the forecast period. This is due to the strong demand for household robots, especially among the emerging economies such as China, India, and Japan.

GMI Research is a market research and consulting firm which provides bespoke industry & market insights to help businesses in making the toughest business decision. We know the significance of accurate data that’s why our analyst use tailored methodology to study each and every market in detail because one size doesn’t fit all. We just don’t cover only the traditional well-established market but also focuses more on niche markets and markets in the emerging markets for which getting information is very difficult, which makes us pioneer in emerging market research space. Our syndicate reports cover multiple industries across regions and countries.

Our in-depth market reports help propel your business with all the data, strategic inputs, and competitive intelligence to move ahead even in the most uncertain times. Featured in the ‘Top 20 Most Promising Market Research Consultants’ list of Silicon India Magazine in 2018, we at GMI Research look forward to helping businesses stay ahead of the curve.

Snapchat Targets To Raise US$4 Billion In IPO